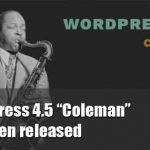 WordPress 4.5 “Coleman” was released April 13th 2016 The new version has improvements and new features but nothing that really stands out as a big feature for this release. There are a good few “under the hood” improvements” but I won’t go into that in this article but here are some of the things that […]

Keith’s work is always very clean, professional and up to date with modern styles. He is always very helpful whatever the query and extremely knowledgeable in his field. He understands the brief and delivers every time